To apply VR to teaching and learning, two hands-on workshops were conducted in March 2018. The first one “Creation of your first CAVE* project” was held at Island East Campus on Wednesday 7 March 2018. In this workshop, Architectural Studies and Interior Design students learnt how to design with VR software to create a virtual environment with their 3D artworks which could be compatible with CAVE setting. The second one “Experience your 3D design in CAVE system” was conducted at the University of Hong Kong. Students were given a chance to put their artworks into “practice” – adopting their CAVE contents into the immersive and interactive virtual environment with vivid stereoscopic views. Positive feedback was received. A total of 13 students attended these workshops.

* CAVE stands for “cave automatic virtual environment”. The CAVE system is an immersive and interactive visualization system, allowing students to experience the developed 3D models virtually. The user wears 3D glasses with an antenna inside the CAVE to see 3D graphic generated by the system. 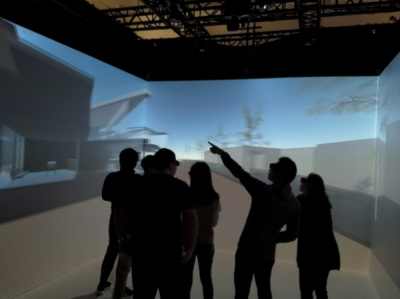