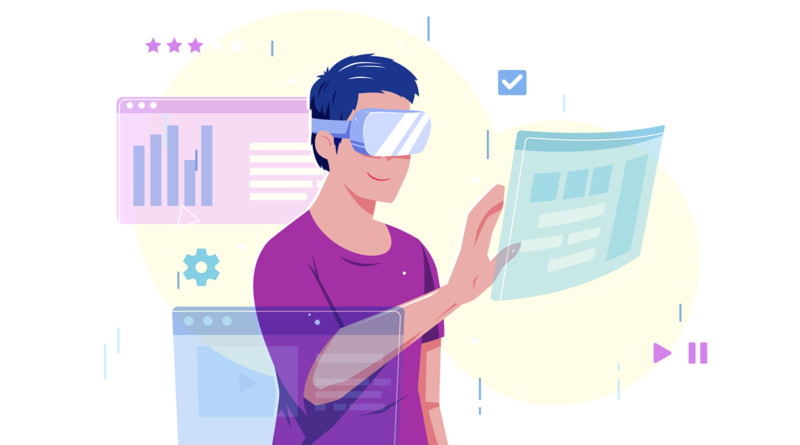 In response to the growing popularity and demand for the use of technology in teaching and learning, the School has adopted different technological innovations including virtual reality (VR) and CAVE (Cave automatic virtual environment) since August 2016 and July 2017 respectively. An innovative project was initiated in September 2017 with the setup of a VR Lab and the development of multi-user VR applications for aviation programmes. Across the years, various VR and CAVE applications have been developed and incorporated into teaching and learning in different programmes and courses. In order to understand how our learners and teachers perceive this adoption, the E-Learning Team conducted two rounds of surveys to collect feedback from students and teachers after using the VR/ CAVE applications.

The feedback from the survey on VR experience showed that a majority of student respondents either ‘strongly agreed’ or ‘agreed’ that VR could arouse their interest in learning, facilitate learning in a more practical way, and enhance learning experience. The percentages of those agreeing or strongly agreeing increased by around 10% in the second survey compared to the first, reaching 94.7%, 91.5% and 93.3% respectively.

It was also found that 47.5% of full-time student respondents and 95.8% of part-time student respondents answered positively when asked if they though the School should develop more VR content for different programmes. In terms of experience in using VR devices or technology, it was found that there was a small increase from 50.0% in the first survey to 56.5% (nwith = 52) in the second.

Regarding the feedback on CAVE experience, a high percentage of respondents (85% or above) agreed that CAVE was easy to use and increased their understanding of the model operation. They also agreed that CAVE Application/System was interesting, engaging, and interactive, and were satisfied with the hands-on experience gained from the CAVE Application/System. An average increase of more than 5% was observed in the responses “easy to use” and “interesting, engaging and interactive” in the second survey. The results revealed that 75.0% of respondents recommended the incorporation of CAVE Application/System in teaching and learning experience.

After analyses of sub-groups with respondents of different statuses, age groups or prior experiences, no major differences in perception were observed. This may suggest wider support for applying VR technologies in teaching and learning among potential users.

However, there were variations among respondents when asked if VR/ CAVE in education would be one of their preferred learning models. 56.5%, 75.0% and 85.3% of them indicated positive responses in the VR, CAVE and Multi-User VR surveys respectively. Multi-user VR applications appears to be most accepted by teachers, followed by CAVE and VR applications.